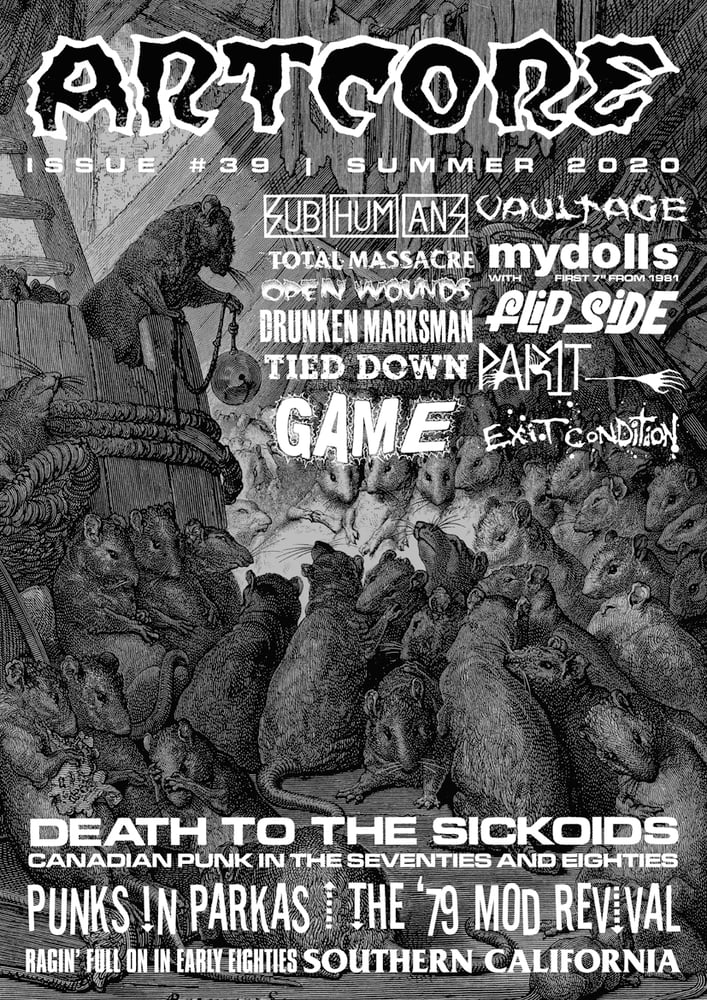 In this issue of the long running UK punk zine you’ll find in depth interviews with legendary UK punks SUBHUMANS, LA’s TOTAL MASSACRE, Amsterdam’s OPEN WOUNDS, South Wales’ DRUNKEN MARKSMAN, The North East’s TIED DOWN and London’s GAME. While the historical ‘Vaultage’ section of the zine features interviews with original LA punk zine FLIPSIDE, London anarcho post-punks PART 1 and Stoke’s EXIT CONDITION. On top of this are the articles: ‘Death to the Sickoids’ a 10,000 word history of Canadian punk in the 70s and 80s, ‘Punks in Parkas’ on the ‘79 mod revival by ace face Neil Cox (Shutdown, Thirty Six Strategies, Diaz Brothers) and ‘Ragin’ Full On In Early 80s Southern California’ featuring the hardcore memoirs of Andy Nystrom (Sorex, There’s Something Hard In There). There are also over 100 reviews and zero advertising, all jammed into 40 litho printed A4 pages.

This three song 7” featuring ‘Nova Grows Up’, ‘The/Rapist’ and ‘In Technicolor’ is an enhanced reissue with new artwork of the Mydolls 1981 debut release on C.I.A. Records (run by Linda of the band along with her husband U-Ron Bondage of REALLY RED). From Houston, Texas, this male-backed feminist art-punk four piece followed their own path, creating a unique post-punk sound that would’ve fitted right in on Rough Trade’s roster of bands of the day alongside THE SLITS and THE RAINCOATS. The band travelled to London not longer after this 7” was released in 1982 to promote the record and were interviewed by John Peel. They went onto release another 7” and a mini-album in the 80s, appeared in Wim Wenders’ film Paris, Texas, as well as playing gigs along side touring bands like MINOR THREAT, THE CRAMPS and SIOUXSIE AND THE BANSHEES, as well as locals BIG BOYS, REALLY RED and THE DICKS. The 7” (with some additional audio) comes on green/grey marble vinyl and is housed in an eight page lyric and photo booklet.