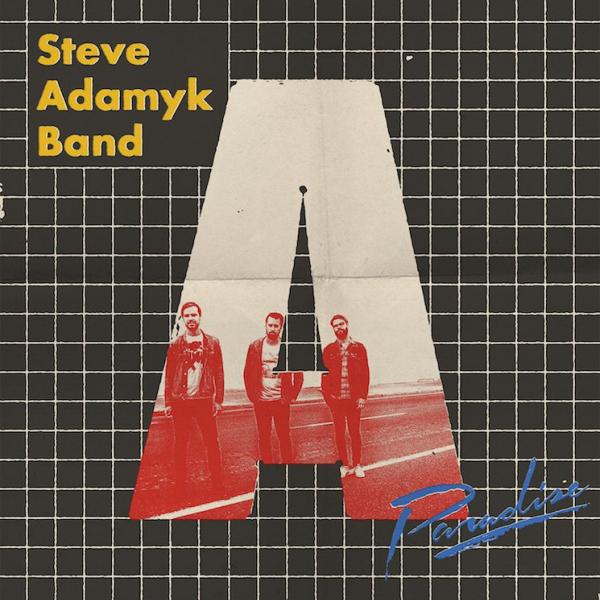 FOR FANS OF: SONIC AVENUES, MOTHER’S CHILDREN, SEDATIVES, GENTLEMEN JESSE, MARKED MEN, DICKIES, BUZZCOCKS, THE INCREDIBLE KIDDA BAND
Steve Adamyk Band remains Canada’s premiere power-pop/punk crossover group. Throughout the last decade, the band has toured Japan, Europe (four times) and all across North American, unleashing five albums and a long list of seven inch singles. But it hasn’t been easy. Most bands, by this stage, would likely have called it quits, yet Steve has persevered. When their most-consistent lineup to date unraveled in 2016, it would have been natural to end it where it stood, but the wheels kept turning (and touring) regardless.
Fast-forward to 2019 and the band has been reborn. SAB is now solidified as a three-piece live (with Pat Johnson of The Acorn on Drums and Johnny O of Uranium Comeback on bass) and are somehow tighter, more focused than ever, as a recent European tour proved last summer. On record, the threesome have also retained original member Dave Williams on vocals to give the songs the same vibe everyone has grown to love. Paradise - the album itself - is nothing short of a monster. Suitably with a new lineup, the band has also beefed-up their sound. With their original feel in mind, there is nothing lo-fi about this record.
Recorded by Mike Bond at Wolf Lake (Crusades) and mixed by Jesse Gander (White Lung, Japandroids) in Vancouver, Paradise is a sonically huge offering, with just the right amount of scuzz and crud where needed. 12 new rippers, including an incredible cover of “Get Off The Telephone” by The Incredible Kidda Band. Keep an eye out for the band in 2019 - Steve Adamyk Band is back and won’t be forgotten anytime soon. The vinyl version will available through Dirtnap records.