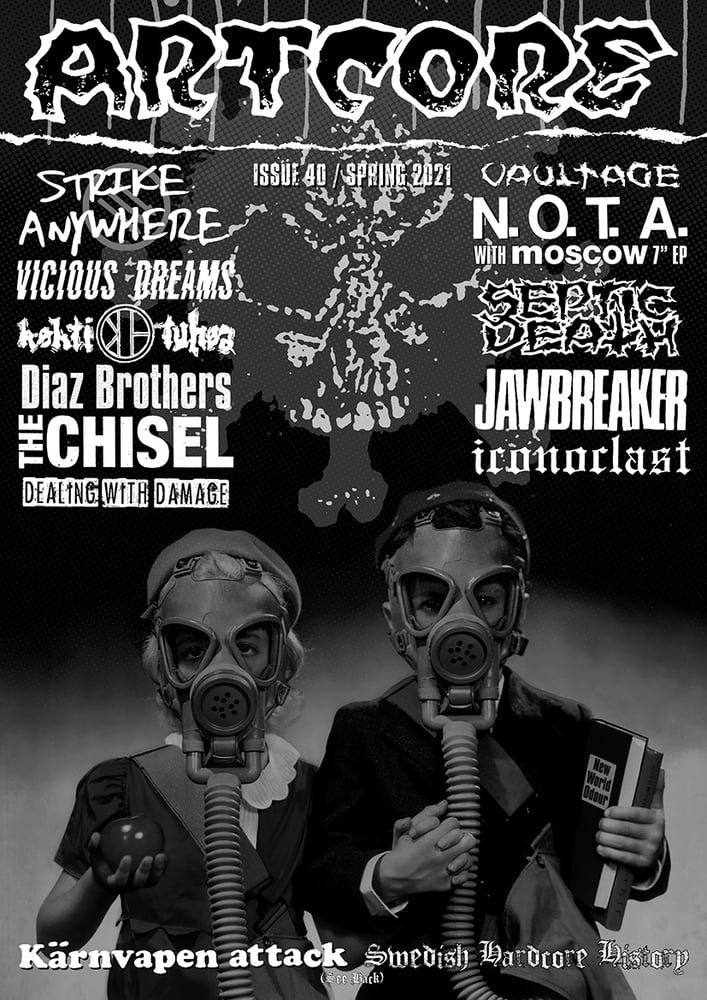 Issue #40 is the 35 year anniversary issue of Artcore and features in depth interviews with STRIKE ANYWHERE and VICIOUS DREAMS from the US, Finland’s KOHTI TUHOA, and DIAZ BROTHERS, THE CHISEL and DEALING WITH DAMAGE from the UK. Vaultage uncovers the history of legendary Boise thrashers SEPTIC DEATH, features an unpublished JAWBREAKER interview from 1991, Californian peace punks ICONOCLAST, and last but not least KÄRNVAPEN ATTACK - SWEDISH HARDCORE HISTORY, a 10,000 word article put together by Helge Schreiber exclusively for Artcore featuring interviews with TOTALITÄR, MOB 47, CRUDE SS, ANTI CIMEX, RÖVSVETT, AVSKUM, THE BRISTLES, PROTES BENGT, FILTHY CHRISTIANS and THE BEDRÖVLERS. To round off this 40 page printed zine there are the usual warped record and zine reviews.

Artcore proudly presents the official reissue of the Moscow 7” EP by N.O.T.A., a true hardcore punk classic from Oklahoma in 1984. The EP features four songs remixed from the original tapes by Martin Halstead, who made the original recordings; ‘This Country (Once Was Free)’, ‘The Enemy’, ‘Taking Away Your Rights’, and ‘Moscow’. The recordings were also then remastered to breathe new life and power into this gem of U.S. hardcore history. The original sleeve has been expanded into a 12 page booklet containing the original lyric sheets, photos, flyers and band history, the 7” is on random colour vinyl (second pressing) and contains a download code of the blazing digital versions. Finally, to top off the release there is the option of a short run of N.O.T.A. Moscow t-shirts, white print on black Gildan Ultra shirts that are also available on a seperate listing, whilst stocks last