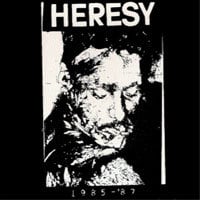 IN STOCK NOW! NEW PRESSING AS RANDOM/COLOUR MIX VINYL !
ABOUT:

BACK ON VINYL , DUE TO POPULAR DEMAND!! REPRESSED ON RANDOM COLOUR MIX, 250 COPIES!
Heresy is one of the most influential UK Hardcore Punk bands ever to exist. From 1985-1989 the band were one of the leading lights of the rapidly expanding UK scene. Heresy’s back catalogue has been totally re-mastered by Kalv Piper and Steve “Baz” Ballam from the band and “1985-87” is the first of a trilogy of discographies that Boss Tuneage has released (along with Face Up To It and 20 Reasons to End It All). This traces the early formative years of the band, from their previously unreleased 7 song demo tape from 1985 to the debut 6 track “Never Healed” flexi-disc 7”EP and contains the virtually-impossible-to –find 4 song “Thanks” 7” EP. In addition 2 previously unreleased tracks complete the 19 track album. With extensive sleeve notes from Kalv, the repackeged vinyl version (available again for the first time in three years) features tons of never seen before photos, tour posters and lyrics. An absolute must for any fan of Heresy or UK hardcore.